New homes are coming to the Clifton area in several different subdivisions, new restaurants are under construction and plans for the new library are also making behind-the-scenes progress.

Desert Peach, which will be a development of 34 homes on a little more than 10 acres near E 1/4, east of 33 Road, is almost finished with the infrastructure phase of construction, although it took longer than anticipated for Xcel Energy to bring electricity to the lots. There will be multiple builders working in the subdivision, including Kevin Young with North Peak Construction, who has also been building townhomes at the Peaks at Redlands Mesa near Redlands Mesa Golf Course and at several subdivisions in the northeast.

“We haven’t been able to close on the lots yet,” said Christi Reece, the listing agent for the five homes Young has planned for Desert Peach. “We’ve had delays with Xcel.”

Young is planning on building five homes at Desert Peach, and all of them will have 1,700-square feet, with three-car garages.

“The location is fantastic,” Reece said. “We’re going to build the same type of houses there that we’re building in the northeast area at Arabesque and Sunset Valley.”

If North Peak can close on the lots by the end of the month and get the homes started before winter, they should be finished by February or March 2022. Four other builders will also be building homes in the neighborhood.

Another nearby subdivision, Vista Mesa, is currently in review with the Mesa County Planning Department. The 8.99 acre parcel currently has one house on it, along with some fields, but the owner of the property is proposing to build 40 residential lots.

Palisades View Subdivision is also in early stages of review with the county planning department, and it includes two parcels of land for a combined area of 21 acres. As it currently stands, the proposal is for 75 lots, with lot sizes ranging from 7,000 to 12,000 square feet.

All three of these subdivisions are urban developments, and they will include curbs, gutters and sidewalks in the neighborhood. Clifton Water and Clifton Sanitation will provide water and sewer services.

In anticipation of the Colorado Department of Transportation’s plans to rebuild Highway 6 through Clifton, the county has issued a contract for design to complete First Street between F Road

The next phase of construction is underway at Palisade Legends, a planned community of cottage-sized homes with high amenities. All of the homes in this phase are under contract with a letter of intent, as are some in the third and fourth final phase.

It’s taken longer than anticipated to build infrastructure at Desert Peach, off E 1/4 Road, east of 33 Road in Clifton, so the builders have been unable to close on the lots. They are hoping to be able to close by the end of the month, and Kevin Young with North Peak Construction plans to begin building homes as soon as he can close on the five lots he’s planning to build.

After years of inactivity, there are now three buildings under construction in Clifton at the northwest corner of I70B and F Road. The building that is farthest along will be an Arby’s Restaurant, and there will also be a Freddy’s and a car wash on that corner.

More housing options and a variety of amenities coming to Clifton, Colorado

There are new neighborhoods currently under construction in Clifton, plans for a new library and continued attention by the county to make the area more attractive to businesses that are looking for a place to call home.

There’s also a young woman who’s excited about the business, Celestial Rose Bed and Breakfast, that she hopes to open in Clifton as soon as she gets the final clearance from the county planning department.

“We want to open as soon as possible,” said Tronette Alexander, who purchased a 2,215-square foot home on the historic register with her husband in March. The couple has spent the intervening months renovating the home and getting it ready for guests.

“I’ve been in the hospitality industry for years; I speak several languages,” said Alexander, who is excited about using her culinary and language skills to create an atmosphere where guests feel comfortable and at home.

When it opens, Celestial Rose will have two guest rooms, and the home has some pleasant porches and decks, as well as a large yard. The home sits on the corner of 32 and E Road, making it a quick jaunt from Palisade, Corn Lake or the Colorado Riverfront Trail.

Mesa County recently completed some infrastructure work along the frontage road after the Clifton exit from Interstate 70 to set the area up for development. 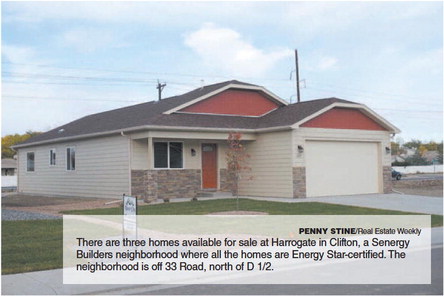 “I’m really thankful for Mesa County for stepping forward,” said Greg Motz with Sun King Construction, which owns a few parcels that are available for sale. They’re also now fully accessible from the frontage road, thanks to the work done by the county. “It’s for safety and for economic development; I thank them for being ahead of the curve.”

There are a couple of housing developments in the Clifton, Colorado area currently under construction, including Butner Estates, a self-help housing neighborhood being developed by Housing Resources of Western Colorado (HRWC).

There are currently 20 homes under construction in the neighborhood, and all of the homes are being built by the soon-to-be-owners who applied for the housing program.

“It’s first-come, first-serve if a person gets qualified for the program,” said Dawn Walker, Housing Solutions Manager with HRWC, which is taking applications for 16 additional homes at Butner Estates, a subdivision north of Patterson off 32 Road. Applicants must commit to working at least 30 hours per week on their home or a neighbor’s home, as the program starts a group of eight to 10 homes at the same time, and no one in the group moves into their home until all the homes in the group are finished and everyone can move. Prospective homeowners do much of the work themselves, although HRWC hires for some of the more skilled tasks, such as electricity, HVAC and plumbing. 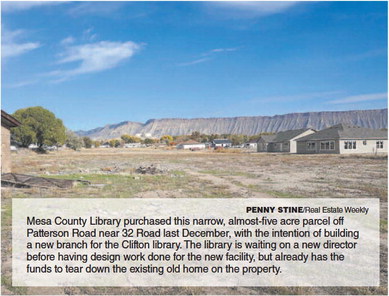 Mesa County Library purchased an almost five-acre parcel of land directly west of Butner Estates in December, 2017, with plans to build a new Clifton branch of the county library system. The current Clifton, Colorado branch is 5,000 square feet, and tucked away in a little shopping area.

“Industry standards tell us the branch should be around 10,000 square feet,” said Bob Kretschman, communications manager for Mesa County Library. “There’s demand for meeting rooms, we want room to have programming, a space that’s versatile to fulfill lots of needs in the community.”

The library hasn’t hired a designer for the new building, but did receive a grant from the Federal Mineral Lease program that will help pay for the demolition of an existing house on the property and for some of the survey work.

For those who are interested in buying a new home in Clifton, Colorado but who may not have the time to spend 30 hours per week building it, there are homes available at Harrogate, a Senergy Builders neighborhood off 33 Road near D ½ Road. Three homes are currently available in the subdivision, which will have a total of 21 homes when it’s complete. Right now, there are only seven finished homes, so buyers can still choose specific lots.

Work is also being done to renovate the clubhouse at Palisade Legends, a modern, cottage-sized, luxury housing community off D ½ Road east of 33 Road. The development is focusing on the community aspect, with a planned swimming pool, a pet hotel, the clubhouse, walking trails and a pickle ball court, among other amenities. It’s also less than half a mile to the Colorado Riverfront Trail. The developer hopes to have three models available for touring by early spring 2019.